CHO (Chinese Hamster Ovary) cells are used to generate about 2/3 of reported (!) global 2020 revenue of ~$245 billions for biotherapeutics. Other cell types , including human, bring this ratio close to 80% in favour of mammalian production sources versus bacteria or yeast. Improvements on the understanding of CHO cell physiology are constantly nabbing away from the range of reasons to use anything else, especially when you include risk profile considerations. Ultimately, of course, this is a decision to be based on the capability of a cell to create the quality attributes required for safety & efficacy in the intended medical indications: CHO cells have a proven productivity and robustness in bioprocessing paired with the ability to produce glycosylation patterns that are compatible with humans. CHO cells have rather frequently been reported to deliver mAb titres of up to 10 g/L in advanced fed batch processes and 3-5 g/L/day in continuous cell culture, which would translate to 30-50 g/L reactor volume in a process with ten perfusion days. The scientific challenge and R&D effort to sustainably get so much elevated productivity from a mammalian cell should not be underestimated, and many current processes still operate with legacy level mAb titres of 1-3 g/L. For many companies high productivity is not the reality, maybe not even a dream that excites them: for example because they do not foresee the corresponding demand for their product or because they have experienced quality / biosimilarity issues when increasing the culture productivity. What are the elements of a good improvement strategy, when the need is there? 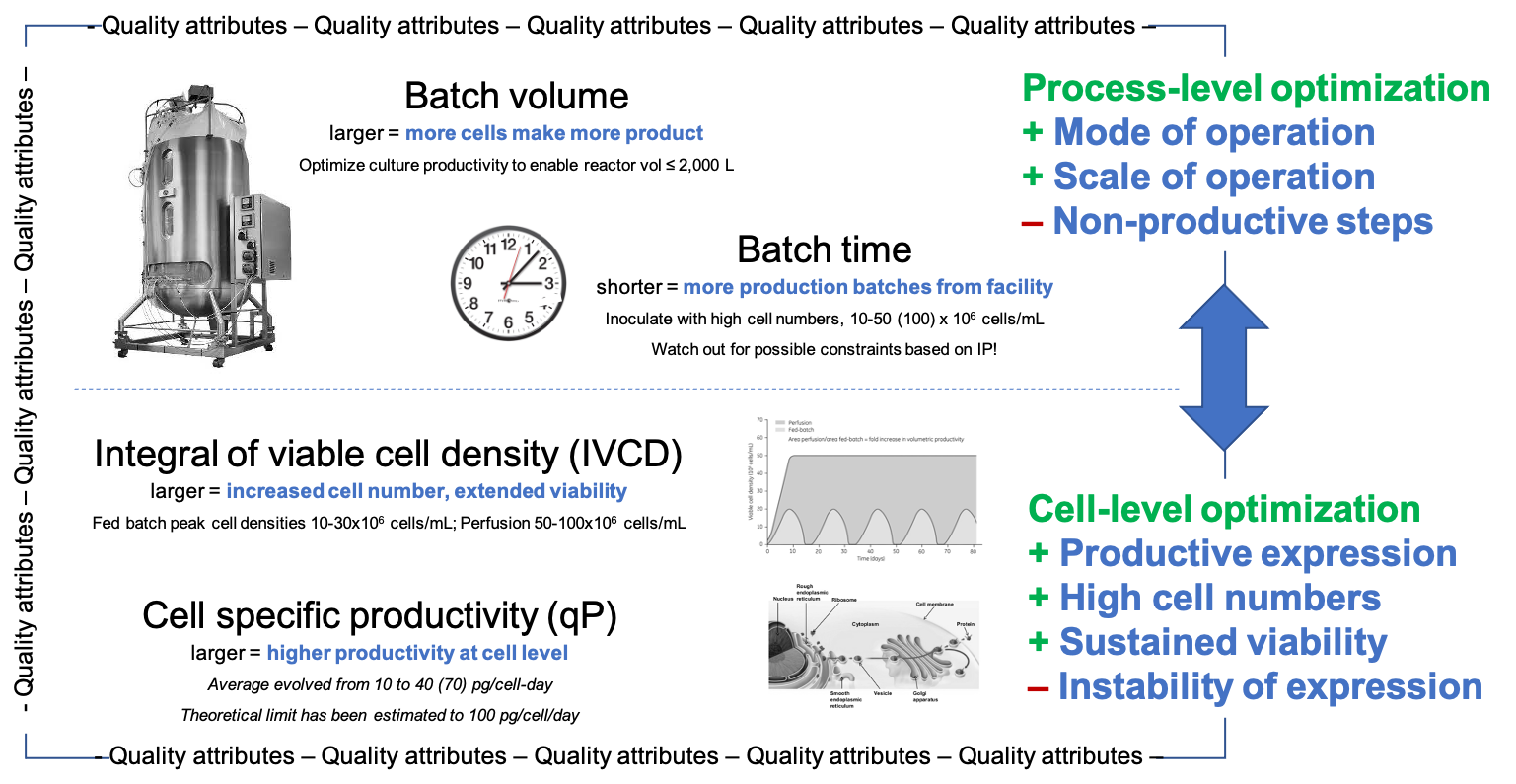 You can work on the cells, the culture media (affecting the performance of the cells in the process), and the way how you operate the process [Fig. 5]. Obviously, all of this work needs to meet the product quality attributes! Cell specific productivity qP can be optimised by means of cell line engineering and culture media optimisation. The achieved qP level is by and large agnostic of the mode of operation, such as different varieties of fed batch or perfusion culture. Viable cell density, VCD, the number of productive cells in a given culture volume and its integral IVCD, depicting the ability to maintain viability over time, can be impacted via optimisation of base and feed media composition as well as feed schedules. qP and VCD increases together yield an improved volumetric productivity (g/L/day), with VCD being the driving factor for productivity increase once the cell clone with its qP is selected. The highest VCD levels are achieved when nutrients are fed to and metabolic waste is removed from the culture continuously and at the same time, i.e., with continuous perfusion instead of fed batch culture as the mode of operation. You have essentially three layers of improvement options: a) engineering a stable high-producer cell line and developing an optimised environment for its productivity with base & feed media offering exactly what the cell needs and can consume at any time during the culture; b) selecting the mode of operation for best simplicity and good-enough productivity (e.g., typically fed batch) or for best productivity and acceptable complexity (e.g., typically continuous perfusion). Option b) would require a corresponding effort as in a) in any case. Hybrid variations with elements of continuous and batch processing may offer the best compromise of productivity, risk and cost; c) complementing your cell line engineering, media design and mode of operation with choices for advanced in-process control (IPC) for best robustness and quality outcomes: maintaining product quality attributes within acceptable limits is an essential element in an integrated strategy for the upstream process at any productivity level.

Fig. 6: Upstream innovation to be implemented more generally in the coming 5-10 years.

Optimization of mammalian cell culture using CHO has come a long way already, with volumetric productivities up 10 to 100 fold from the earliest legacy processes, dependent on how your projects have kept pace with the leading laboratories. We expect that, 5-10 years from now, the industry will have 3-5 g/L/day of mAb production within reach (using optimised varieties of perfusion culture), if and when market demand requires such productivity levels. That would be 6-10x up from a 5 g/L mAb titre in a fed batch process, assuming 10 perfusion days. Many of the approaches enabling such progress are already in use in some labs or being developed and tested in others [Fig. 6]. Balanced media and feeding formulations that avoid accumulation of by-products (e.g., lactate) and provide the cells with what they need (and no more) at any time during the culture are essential to achieve best productivity. Methods such as Raman spectroscopy for metabolite control and capacitance sensors used to adjust feeding to cell mass can help to automate the culture and avoid risks to product quality and a lack of control. Process models are used to support the automation. Methods of systems biology and genome editing are applied to accumulate a level of understanding of cell physiology that enables targeted manipulations improving qP and viability of cells in the artificial environment of a bioprocess.

The upstream process has two essential parts: the seed & inoculum train and the cell culture process at scale. Typically, the cell culture process also has two parts: the growth phase where the cell number is increased and the production phase where protein is expressed and secreted. From an efficiency perspective, the former part can, conceptually, be considered non-productive, and the time occupied with it could be minimised. To achieve this, growth of cell numbers to process scale level could be placed offline from the actual cell culture process, i.e., entirely into the inoculation train. The reference list, which logged-in readers can download, has several papers describing this approach: using perfusion in the N-1 seed culture allows to boost cell numbers available for inoculation of the production reactor, reduce the growth phase by several days (2-6d) and still reach the same mAb titres as before. With such shortening of batch time for the cell culture process comes a 15-30% potential increase of facility output via an increased number of batches run in any given year.

Dependent on the approach taken, some of the improvements discussed here may come at the cost of complexity of the process, the equipment and the required control level, i.e., ultimately a financial cost. A feasible balance needs to be found between productivity and simplicity matching the scenarios for market demand and product portfolio developments that a business foresees. However, the emerging opportunities to achieve (much) higher productivity will trigger developments in process monitoring technology and process modelling (AI) that will benefit the whole industry with more robust and efficient responses in a very dynamic environment.