The Sixth Extinction - An Unnatural History, by Elizabeth Kolbert

Elizabeth Kolbert has been a staff writer at The New Yorker since 1999. She received the Pulitzer Prize for the book I recommend to you here. The Sixth Extinction is a rare example of page turning story telling about something excruciatingly complex but at its basis dead simple: it's our fault that so many species are at the brink of extinction and that we face a profound loss of biodiversity! Penetrating the last square meter of jungle and the last litre of ocean water, humans are likely worse than the asteroid that put an end to dinosaurs, just slower. Depressing news, mildly put, but Kolbert's writing makes you want to understand what's going on and get the full picture. She elegantly breaks down the scientific facts and the historic findings for you to follow her story and get the message ... it works because it's personal, she takes you on her very own journey of learning about it. A unique quality in the soundbite culture of today's communication! 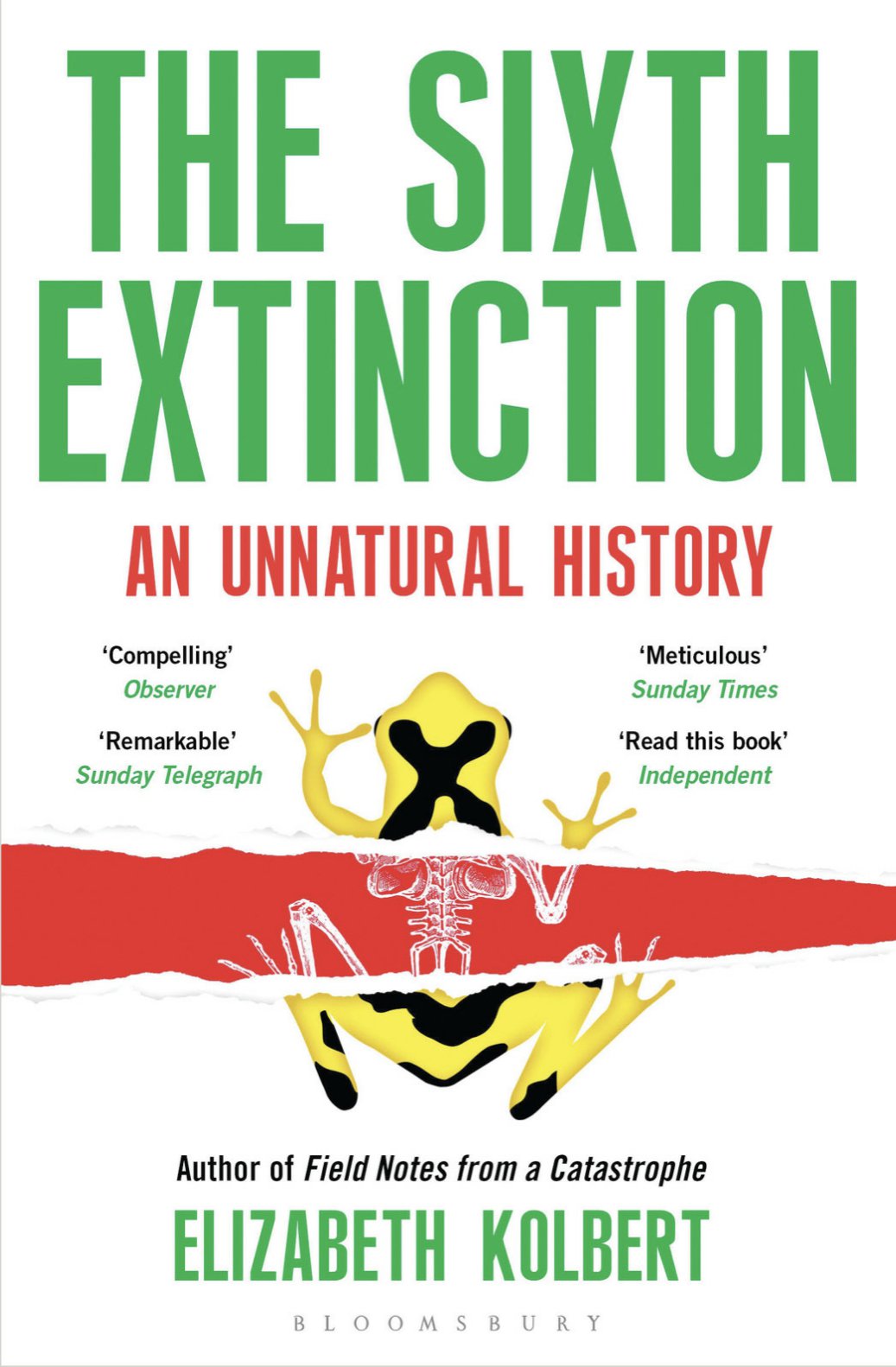 Species extinction is not happening for the first time ... the big extinctions are exceptionally rare events though. Extinctions 1 through 5 were distinct, relatively speaking short periods in over 500 million years, when the usual rules of survival were suspended. Kolbert writes: "The very traits that have been most useful for dealing with ordinary threats may turn out, under such extraordinary circumstances, to be fatal". Normally, extinction happens at a very slow rate: this "background extinction" is estimated to run at one species extinction per 1,000 years. Right now, we witness extinction rates 40 to 50 thousand times higher than background, and so experts speak of the "sixth extinction". Estimates for now are that "one third of all reef-building corals, a quarter of all mammals, and a sixth of all birds are headed toward oblivion". It happens everywhere, in all oceans and lakes, in the arctic and the desert, on mountains and on islands. Still, in the history of science, extinction is new, it was "discovered" as "a world previous to ours" only 200 years ago. Less than ten generations later we begin to realise in bewilderment how "our world" may not survive without major damages for much more than another two generations and maybe not at all, if we don't change beloved habits and come up with radically creative ideas about how to avoid loosing the beauty of nature, much of the foundation of our own existence.

“The Sixth Extinction” by Elizabeth Kolbert is, in my view, a must read for everyone, whether you immediately change your ways after being through it or not ... understand what happens around us and consider your personal responses! This book is likely to rattle everyone's cage and question the comfort zone of previous habits and preferences…

Go to Elizabeth Kolbert and get an impression of her work. This book has first been published in 2014 by Bloomsbury Publishing Plc, UK (eISBN 978-1-4088-5123-4). It is available in other languages too ... French, German and Spanish, Portuguese and many more. Please click here for the feedback form, we are curious to hear about your thoughts.